>>>An announcement first! Don’t forget to take part in our winter competition and submit your video testimonial here!<<<

If any of you need help with the testimonials, let me know.. We can do it via G+ Hangout and get your vid ready. #oneWeekLeft #myblogguest

First, let’s take a look at guest blogging myths almost everyone is concerned about (mind that the only method MyBlogGuest has been promoted was guest blogging so we really do know what we are talking about):

The reality: A *great* guest post can drive a few really interested people to your site (usually those are people who liked your guest article so much that they decided to click through your links to learn more about you). But those will be really few.

Our own case study: From hundreds of guest posts that were push live with “MyBlogGuest” in the byline, the only one that did fairly well was Mashable’s guest post (mind that they place the byline *above the fold* which is not really common, yet that link didn’t get an overwhelming amount of traffic): 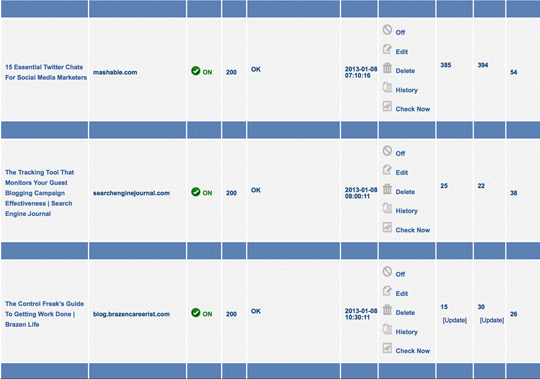 (Stats is courtesy of our Link Tracker: As you can see, a guest post at Mashable drove only 54 hits our way)

Myth #2: Guest blogging only makes sense if you contribute to huge blogs

This one is somehow connected to Myth #1. There’s no reason to only focus on huge blogs: Traffic is not worth it and the time of waiting and placing is discouraging.

In most cases contributing to smaller blogs (while doing your job building relations) is much more effective: newer bloggers are hungrier for new connections, they are more ready to give back and, let’s face it, they are faster to publish and promote your article. What’s more important, they are likelier to remember you and keep helping you in the future.

Remember, all blogs were small one day, so you have a good chance to grow together with your blogging connections!

Myth #3: Guest blogging is great for getting backlinks

The reality: Ok, not exactly a myth (those links may work) but focusing on links is a waste of time! So you get 10 links a month that will go down the archive a couple of weeks or month later. Now what? Getting 10 more links next month? This is a complete waste of time and resources: Like any other content marketing tactic, guest blogging should aim at making links flow in on their own for you not to build them. Otherwise, it’s low efficient.

Our own case study: We did a presentation featuring our own content study: How one guest post at @2createawebsite brought us one link to MyBlogGuest, but then links kept coming because Lisa kept linking to us from her further articles driving more users our way!

@Roadturn The links should be things that enhance your article, instead of being just placed in to hopefully rackup backlinks #MyBlogGuest

you guest blog great content, readers link to it on their own, host blogger loves traffic/asks you for more. Circle of life! #myblogguest

This brings us to the actual topic of this Twitter chat: the real power is in building relationships, NOT links because people put links and that’s much more rewarding than hiring someone to do that.

Write on, @myblogguest. Build community to succeed at (anything). #myblogguest

Don’t trust our own case study? Here are a couple more:

Case study #1: Read this case study on promoting a book and mind the “Guest Posts” section. And I quote:

In my experience guest posts don’t drive a lot of traffic. Instead I find that guest posts are better for making friends with site authors and for gaining more credibility. My goal with guest posts is to create a blanket effect. Meaning that someone in my target market should see several tweets, read a couple of guest posts I’d written, and see my post on Hacker News. The idea being that they may not pay attention the first or second time, but after seeing my book mentioned several times within a couple hours they will click through and be more interested.

It worked. A few people made comments about how “they had seen like a billion posts today” that I had written.

Ann’s comment: The “blanket” (or “be everywhere” what I call it ) trick is what I’ve been using for ages: I blog on huge and small sites all the time and people keep seeing me again and again:

I’ve posted for several large blogs now, and I can say with all sincerity there have been posts that yielded no noticeable lift in traffic.  But when I spend between 15-20 hours researching an audience, there’s always a decent little bump from byline clicks…

Every popular blogger started at zero. Most of them will be willing to help, but only if you’re hungry and WILLING to realize success doesn’t happen overnight.

In other words, don’t make your guest blogging efforts about “getting famous”, but rather to simply be invited back.

don't worry about getting famous. worry about providing a useful post to the audience of the blog #myblogguest

Ann’s comment: MyBlogGuest doesn’t do that well in Google (one reason is that I’ve never promoted the important keywords like “guest posts” and “guest blogging”) but we still are getting some hits from Google. And you know the most frequent word people are searching?

It means people talk and read so much about us that we don’t really rely on keyword rankings, links or direct traffic from Google. We have our brand name! 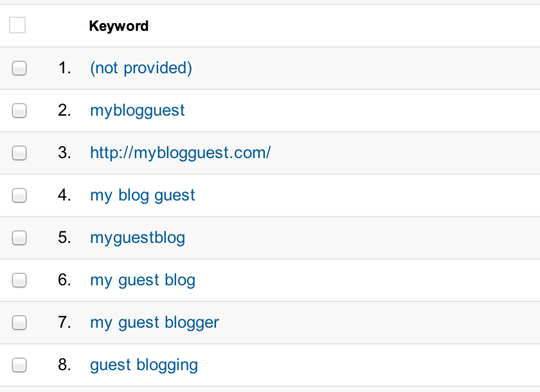 And final word from Michael Martinez:

That is what the future of guest blogging should be all about. You don’t want those links nearly as much as you want the traffic. If you force yourself to work in an Either-Or mode you’ll write the best damn guest blog posts possible. After all, your brand depends on it as much as the people who accept your guest blog articles.

To me ACHIEVABLE goals of GB (which I ACHIEVED btw): natural links, everyone knows me and MBG #myblogguest cc @Boehmcke

the SEO benefit for guest blogging isn't from the obvious bio links, it's from everything else that comes from being known #myblogguest